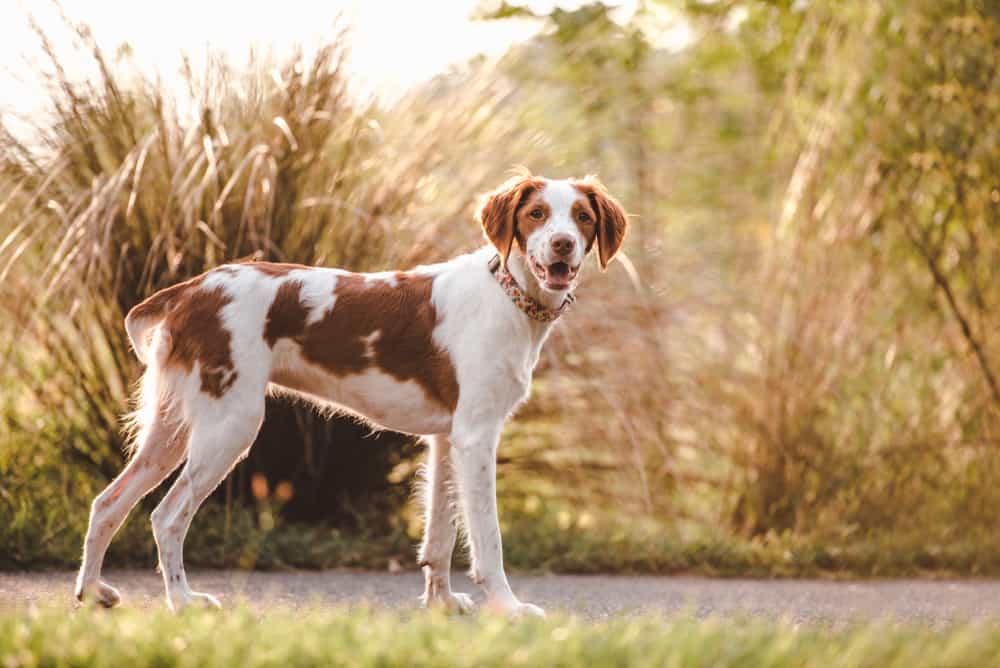 When heading out on a hunt with your trusty gundog by your side, you need to mirror each other’s movements and almost know beyond doubt what your partner will do in every possible scenario. If you are starting the hunting journey with a Brittany dog or adding a different skillset to your existing pack, you will need to know if the Brittany’s are pointers or flushers.

The Brittany dog, originally thought to be the family of the flushing Spaniels, is proven to be more closely related to the Pointers and Setters. The Brittany shares the genes and behavioral characteristics of the Pointing breeds and is most likely to point at a hidden bird rather than flush it out.

The Brittany is more than a one-trick pony. They are very intelligent and sensitive dogs that love to work alongside their humans. Let’s “flush” out some more facts about these clever dogs.

The Difference Between a Flusher And A Pointer

Some bird dogs are incredibly versatile and will to some degree, perform the role of flusher and pointer, but there are a few breeds that are complete naturals at the job they were bred to do.

Flushing dogs usually work the cover within shotgun range, close to the hunter. They work to chase birds into the air for the hunter to shoot. The hunter needs to know their dog’s signals and be ready to take the shot when it is onto a bird. Retrieving comes naturally to many flushing dogs, and they are easily trained to bring birds back.

Pointing dogs usually travel a little or far out of the hunter’s shotgun range. When the dog finds a bird, he “locks up” and points at it while the hunter walks in to flush it out. Some hunters like to keep their pointer within shotgun range in case of unplanned flushes of frightened birds. Pointing dogs aren’t natural retrievers, but they are intelligent and can be trained to retrieve the bird. Most pointing dogs will re-point after finding and downed birds and usually chase down injured birds (cripples).

All About The Brittany Breed

The Brittany is a gundog bred for bird hunting. They are often mistakenly referred to as the Brittany Spaniel, although they are not genetically closely related to Spaniels. The American Kennel Club reclassified them in 1984, omitting the “Spaniel” from their name as they have more in common with Setters, which are pointing dogs.

Brittanys are named after the province, Brittany, in France, where the breed was developed between the 17th and 19th centuries. They were only officially recognized as a new breed early in the 20th century. Today, we have two variations; the French Brittanys, which are used for hunting upland birds and rabbits, and the American Brittanys, which hunt almost exclusively for upland birds.

The Brittany is the smaller of the HPR (Hunting, Pointing, and Retrieving) dogs, but still has a bigger dog’s energy and determination.

The Brittany As A Working Dog

Although they look like spaniels, Brittanys are true HPR. They are most content when hunting at a gallop, often at a substantial distance from their hunting sportsmen. The Brittany is a cooperative pointing dog with natural hunting instincts and some retrieving ability. Brittanys can cover a lot of ground thanks to their speed and agility.

A well-trained Brittany is a controlled and graceful hunter, responsive to the whistle and dependable on point. Brittanys are lightning quick and often make other fit HPR’s look sluggish. They are best suited to open country when game is scarce and requires a good amount of work to find. They are sensitive to harsh correction and are more responsive to positive reward methods of training.

Brittanys are not always keen to retrieve downed birds, which stems from their French ancestors who worked with laidback hunters who did not ask the dogs to retrieve. This trait is highly sought after by falconers, who prefer a dog that will not instinctively try to recover your Goshawk.

The Brittany As A Family Dog

The Brittany breed has a kind and friendly disposition and is eager to please its humans. They usually integrate well with other pets and children, but have incredibly high energy that could cause them to hurt a small child accidentally.

Brittanys are working dogs and need to do just that! They need lots of space to run and play and need a good hour of exercise each day to keep them from getting bored and developing bad habits. If you are not a hunter and won’t be hunting with your Brittany, maybe consider other dog sports like agility, flyball, or dock jumping to keep them stimulated and as a release for all their energy.

If your family is active and willing to put in the work with this little firecracker, then get ready for a fun, happy, hard-working, and totally loveable dog.

If you choose a Brittany to use for hunting, you’ll find that he is a natural pointer with a closer working range than other HPR’s. Brittanys lock-on game and will retrieve both on land and in the water if trained to do so. Brittanys are an excellent choice for people who are new to the sport of hunting because they have a keen hunting instinct that will only be enhanced with proper training.